The History and Meaning of Christmas Lights 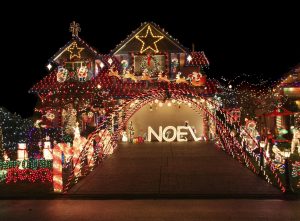 Have you ever wondered why we hang lights to celebrate the holidays?

During the Christmas season, many people enjoy decorating their homes with lights. They put them on their Christmas tree inside, and outside, they arrange lights on the house, trees, and shrubs. Sometimes spotlights are used along with lights in the windows. In some areas, it even becomes a sort of competition between homeowners who try to outdo each other with their holiday lighting. They create elaborate light displays that are timed to blink according to holiday music. People come from miles around to see these imaginative light shows.

Today’s holiday lights have evolved quite a bit since Thomas Edison displayed the first electric lights outside his laboratory in 1880. The tradition of using lights during Christmas most likely originated in Germany during medieval times with the burning of the Yule log. This was done during the short, dark days of winter to help bring light into the home. Churches soon adopted the practice and the light from the Yule log was thought to symbolize Jesus as being the light of the world.

People in Germany and in Scandinavian countries put evergreens in their homes as a symbol of spring and eternal life. When people from these countries came to the United States, they brought the tradition with them, putting a tree in their home during the Christmas season. In the middle and late 1800s, people actually put candles on their trees. However, this was quite dangerous, even though candles were lit only for a few minutes.

Thomas Edison patented the electric light bulb in 1879 but only the wealthiest people had them because they were so expensive. The use of electric lights became more affordable and widespread by the 1920s. Then the Great Depression hit and it was followed by two world wars. Some people thought that the Christmas tree and the holiday lights represented peace and hope. During these very difficult times, people found solace in their traditions, including the use of decorative lights at Christmas.
Today, when you look at your Christmas tree all lit up at night and see the lights twinkling, you will now have a better understanding of why many people enjoy such a beautiful and magical tradition.

For all of your landscaping or hardscaping needs, including holiday lighting, the professionals at Aqua Bright can help. For a consultation and to hear what we can do for you, give us a call at (410) 489-9009 or visit us online. For more information on the many irrigation and illumination services we offer, follow us on Facebook, Twitter, LinkedIn, Google+, Houzz, YouTube, and Pinterest.

Categories: Holiday Lighting | Tags: Aqua-Bright, christmas lighting, holiday lighting, and outdoor lighting
This entry was posted on Thursday, December 21st, 2017 at 9:44 am. Both comments and pings are currently closed.